Glaciers on Iceland: Everything about them

Glaciers on Iceland: Everything about them

Iceland is notoriously covered in ice for the 11% of its land. We guess, which country would not have ice if its name has the term ice in it. Iceland possesses a cluster of different glaciers and related landscapes (other than the volcano that is) that are scattered throughout its majestic landscape.

Iceland is also popular for tourist visits and international layovers. So you might want to pack up and get ready for these glaciers as they are a sight that is meant to be seen.

Moving on, we would like to tell some general information about these ice-capped glacial landscapes. We will also discuss their origins, history and their history in Iceland, among other things. Afterward, we are obviously liable and discuss Iceland’s own glaciers in the present time, and how you can visit them. So, let’s break it down in the next section.

A glacier is a dense form of ice that is accumulated after the process of ablation (melting and sublimation) taking years or even centuries. The way a glacier is made is called glaciation. Over 99% of glaciers are covered in ice-sheets, on this planet. There has also been evidence that that true glaciers like the ones on earth are also present on Mars. These are different from the rock glaciers that are found on Mars and have a different topography.

Glaciers also exist on mountainous ranges, even on the one that is in Oceania’ High Altitude countries such as New Zealand and Papua New Guinea. What’s more is that these glaciers right now are also the biggest reservoirs of freshwater here on earth. The Alpine, polar climate glaciers store water in the colder seasons and release it as meltwater during the end of the season. This makes it a water source for human beings and animals to use it. Though within the Antarctic and very high altitude glaciers locations the freshwater is unable to melt due to their freezing points.

Another thing about these glaciers is their distinctive blue color. It is because the blue color is difficult to be absorbed by water when it is compressed. Another reason is that the pressure of compression by ice of the air bubbles in water (that give water it’s transparent color) is squeezed out during the process.

History and timeline of glaciation:

Near 5 to 6 major ice ages have taken place during the last 3 billion years. The latest one was called the Late Cenozoic Ice age that took place some 34 million years ago, whose latest stage was Quaternary Glaciation. Cenozoic’s latest phase began nearly 2.58 million years ago and ended 11,700 years ago.

The current interglacial period is called Holocene. While you know about the current situation of glaciers all around the world, it was not as easy as the when our ancestors walked the earth during the later ice ages. The initial ones were in fact so severe that the whole earth froze over. Meaning the entire earth was covered in ice, literal dense. And the weather may have been uninhabitable for humans beings if they were existing at that time. 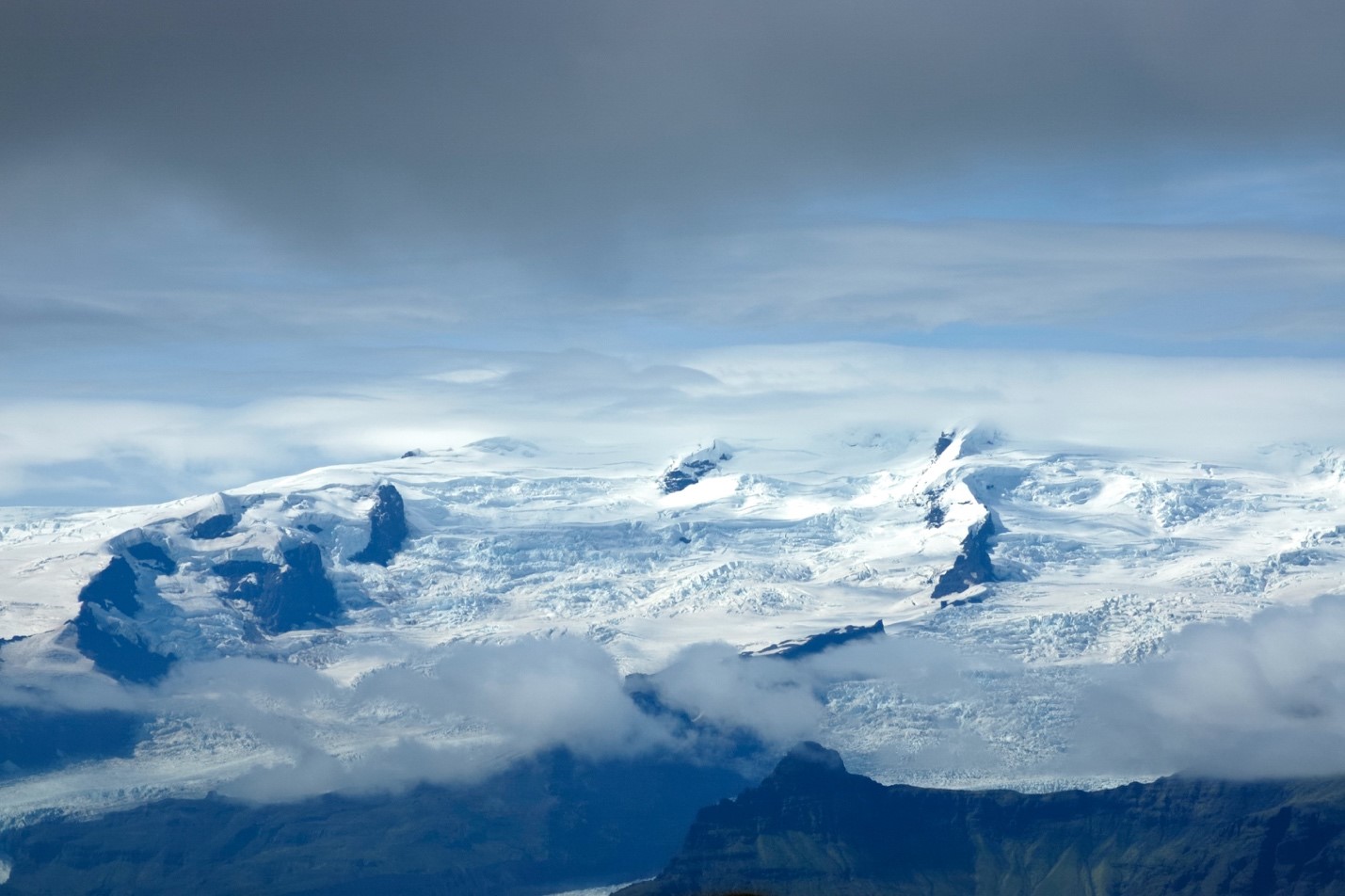 History of Glaciation in Iceland:

Rather than ancient history, we will talk about the most recent history that pertains to current glaciers in Iceland. The best known of glaciers on Iceland called Brúarjökull, first surged in 1810, again 1890 and then again in 1963-64. This happened in Vatnajökull system of Iceland. In 1890, it surged around 10 km in distance. Then before the recent surge again it stayed stagnant and then finally retreated. It surged again throughout the period of 1963-64. Brúarjökull is a great example of a glacial landscape created by surging glaciers.

Glaciers on Iceland have had their own little Ice age during the eras of 1890 – 1920. Climate variations in Iceland have an effect on the makeup of all its glaciers. And, since the 1930s, the climate of Iceland and the climate change all over the world led to the retreat of many of Iceland’s glaciers. But, in the start of the 1940s, the change in the warmer climate (cooling of climate) led to a slowing of the aforementioned retreats. The 1970s saw more advancement of glaciers because of the cooling period until warmer climate led to the retreats after 1985.

These retreats and surges from time to time have left natural-made structures around Iceland. Beautiful parts of glaciers have been made into glacial sediments and landscapes. These include dremlin, glacial flutes, eskers, and etcetera. This naturally made landscapes and structures can act as a natural class for geology students and researchers.

As mentioned previously that Iceland’s 11% of the land is covered ice. This means there is going to be a lot of room for different types of glaciers be it the ice caps, mountain glacier, rocky glaciers or etcetera. There are almost 269 named glaciers in the whole of Iceland. But here we are mentioning one of the best or one of the most popular ones. 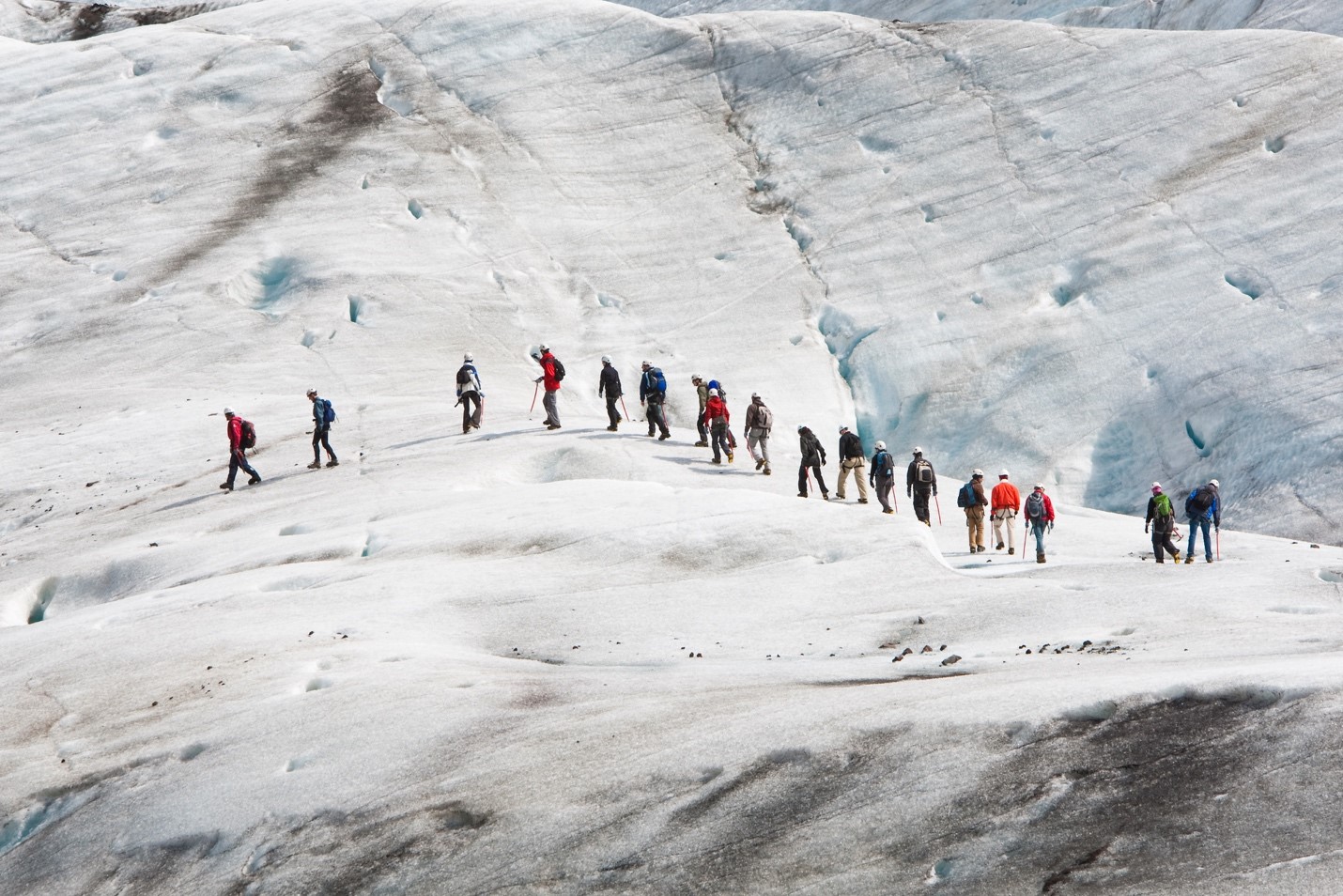 This one not just the biggest in Iceland but in the whole of Europe too, which makes it a must-see natural wonder if you visit Iceland. Svínafellsjökull, a location which is part of this glacier range, has been a star of two Hollywood movies, Batman Begins, and Interstellar. There are a lot of activities to do here, like ice caves, glacial lakes, and Diamond beach are major and popular attractions for tourist. Vatnajokull National Park, which is open all year round, is perfect for a glacier hike.

Langjokull is the second largest glacier in Iceland and its name literally translates into “Long Glacier”. It is called long because of its oblong shape and is visited by tourists and locals alike for its snowboarding culture. It is located at the heart of the  “The Golden Circle” considered by many as a must-see attraction of Iceland. There is also man-made ice tunnel/cave where couples can get married. Skiing and snowboarding in the area are also predominant.

This one is hard to reach and the third largest glacier of Iceland. But, the challenge of reaching it, also makes it a good attraction for those are looking for a distraction. Located at the middle of the Icelandic Highlands, it is only is the summer months. Tours are also provided but normally they have a 4×4 and an experienced guide.

It is a lot smaller in size than the one described next one that is also its neighbor and is infamous for 2010 Eyjafjallajokull volcano. The hike is the perfect way to see both of the glacier (as it is visible when on the hike) in one go. 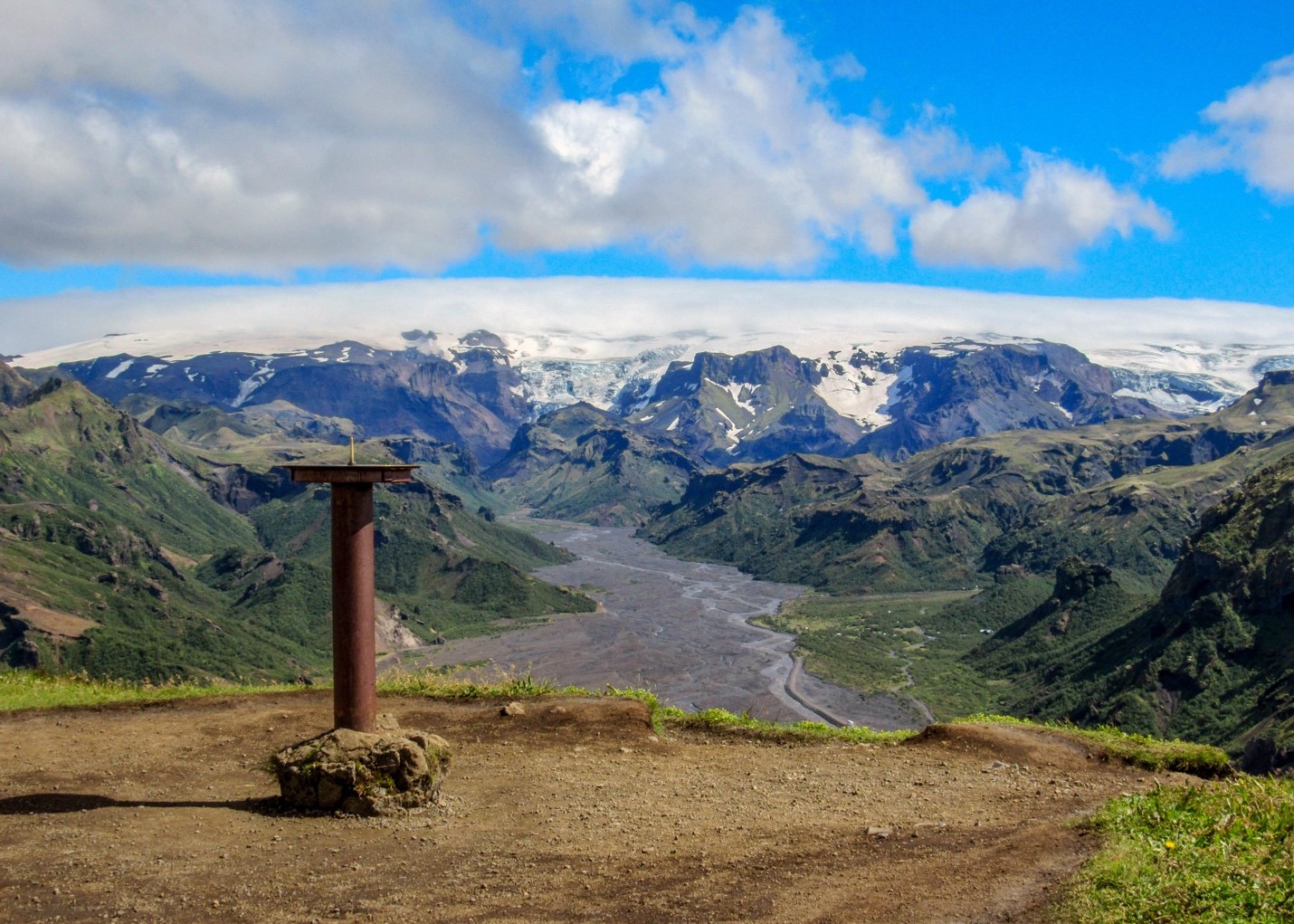 This is the neighbor of infamous Eyjafjallajokull glacier and is bigger than it too. It is also the fourth largest glacier in Iceland. It also serves as a home to the world’s largest and active volcano called Katla. 4×4 and snowboarding are also predominant and there is also a great and special hiking trail called Fimmvörðuháls. The special hiking trail takes us from Myrdalsjokull glacier to its neighboring Eyjafjallajokull.

This glacier is a special kind of glacier, as its height does not exceed the limit of 1000m. It is also not part of the group of glaciers that recently receding at a very high speed. It may be a little far away, as it is found in the remote Westfjords area, which is in far north of the country. Tours can be taken if you think it is hard to get here.

Solheimajokull stems for the tongue of much larger Myrdalsjokull glacier, but maybe as popular. It may be because of the different crevasses and caves it possesses that are best for ice hiking and climbing. Check out our Iceland south coast glacier hike tour with a professional guide 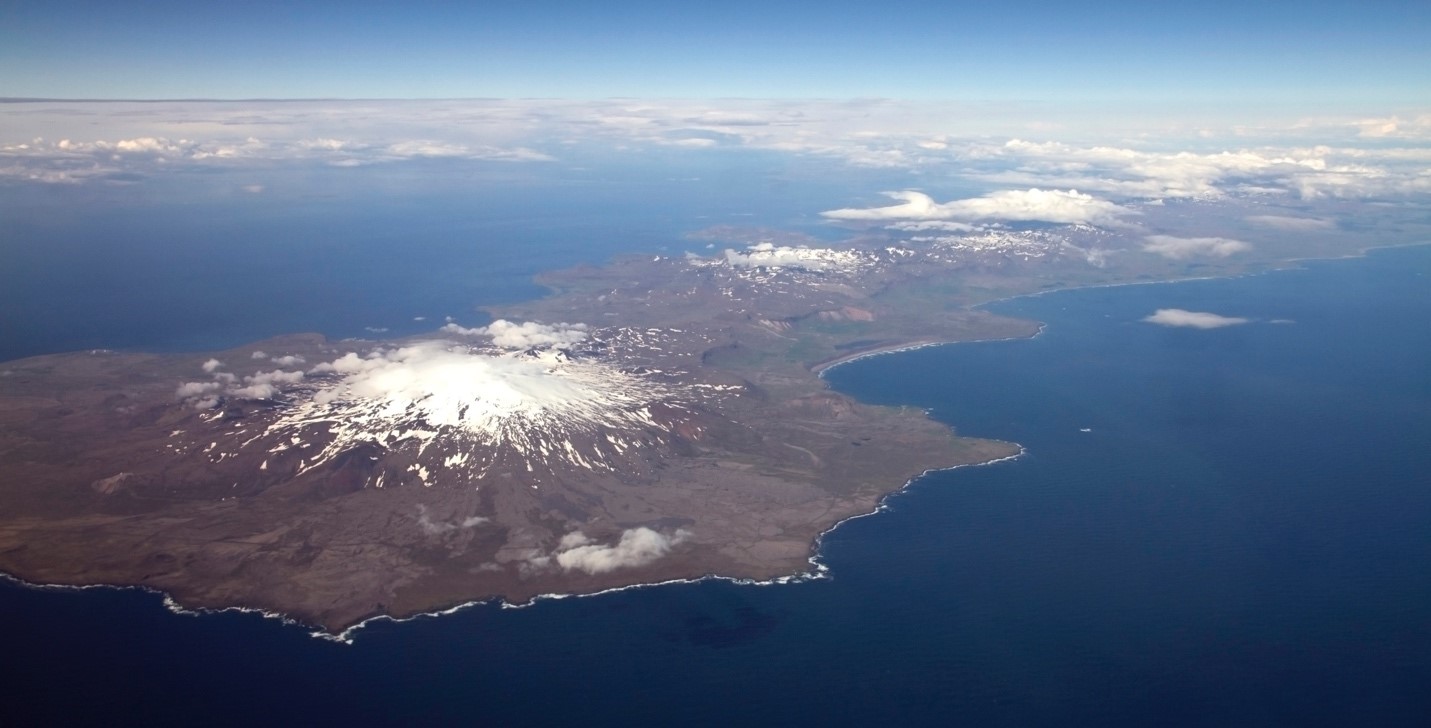 Located at Snaefellsjokull National Park, this one shot to fame when the famous French author Jules Verne, made this glacier as a set of his novel. The novel was called “Journey to the Center of Earth”. And, it is also the smallest one in Iceland, and also the most popular one. This one is surrounded by a waterfall, black beaches, and lava fields, even though it is magnificent by itself.

An outlet glacier of Vatnajokull System and practically the most famous one too. It has an active volcano, which is Iceland’s Largest. This one also has Iceland’s highest point Hvannadalshnukur, that stands 2110 m above sea level. It makes the reason for many hikers coming here for a glorious hike.

The name literally translates into “Falling Glacier”. This one is also is an outlet glacier of Vatnajokull system. The falling glacier is located in the southeast of Iceland right along the coastal road. Tours can be arranged from Skaftafell to Falljokull then straight to Vatnajokull glacier. This tour is very popular among visitors.