Why the Golden Circle is a must see place in Iceland

Iceland is a land of many majestic locations. Incredible sights like lava fields, blue colored ice caps that are the biggest in Europe and things like exotic flea markets are in abundance. It is a good place to layover when you are traveling and an interesting choice for vacations. Natural phenomenon like Northern Lights and Mid Atlantic Ridges are sights to be seen. But, while it may be blessed with a number of rich sights that are a must see location, one of these popular locations is the Golden Circle.

The Golden Circle may, in fact, be the most beloved locations of Iceland. It is actually a route of 300km (190 mi )distance to Iceland’s most famous locations. These locations are Thingvellir or Pingvellir National Park (a UNESCO heritage site), Geyser Geothermal field and Gullfoss Waterfalls. The route loops from the capital city Reykjavik to the center of Iceland and then back to the capital. Sometimes it is also referred to as the “Golden Triangle” because of its three locations (You know the three sides of a triangle if you did not get the metaphor).

It is not saying these are the only location and main attractions of The Golden Circle. In fact, this route has a number of other attractions and location along the route while the three mentioned above are the main attractions. We will talk about them in more detail but first, we must provide you with information why is this landmark route warrants a visit by everybody. Many companies like ours provide tours through this route. 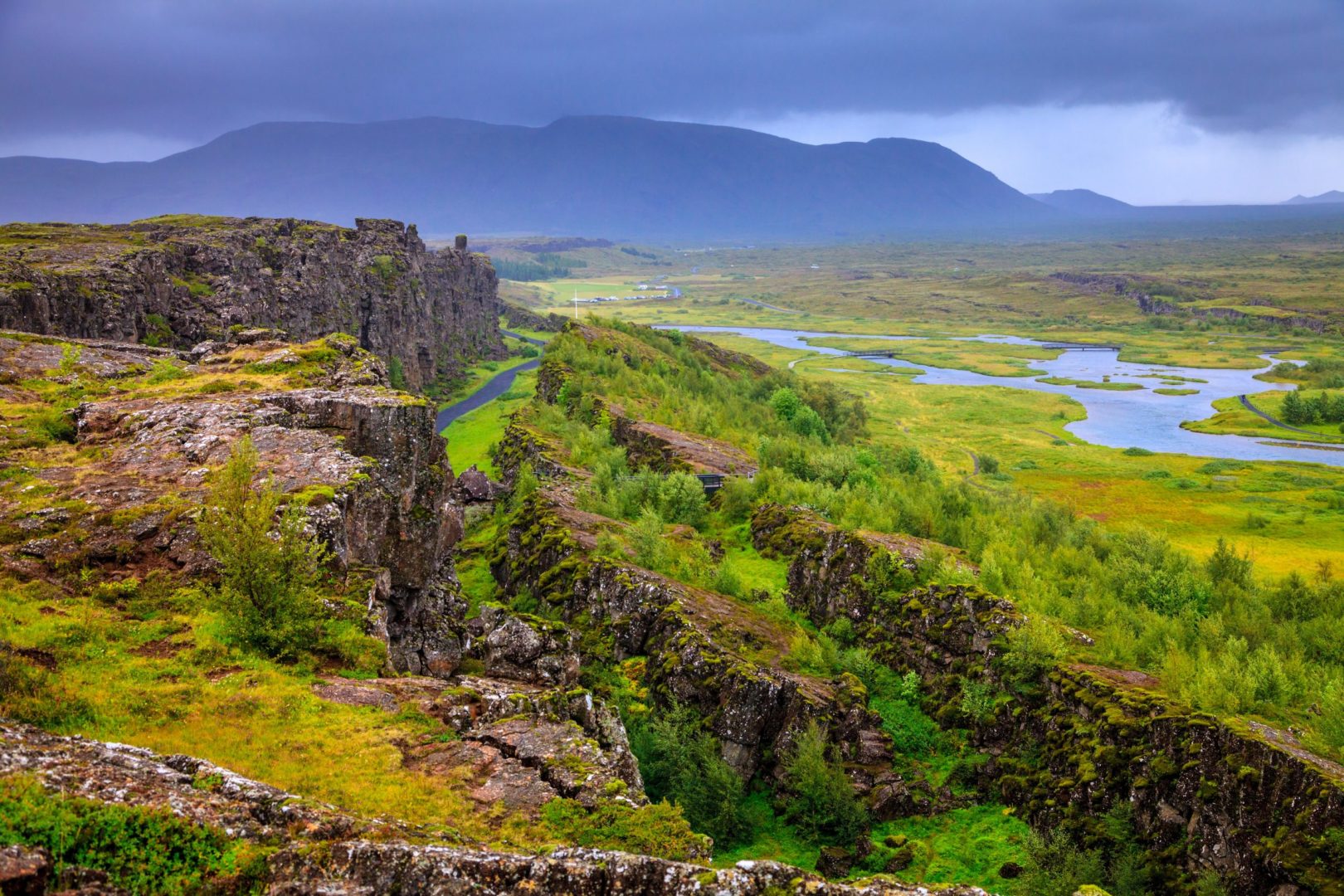 This place has a historical and geological significance for the island country of Iceland. We’ll start with the most historically significant: This site was the inauguration place for the world’s democratic parliament. It was the named the Althing and was established in 930 AD (10th Century). Althing is the oldest active parliament although much of the parliament has shifted to Reykjavik (it did in 1844). It was established when the Vikings came to settle in the land now known as Iceland and wanted to have a dialogue.

Thingvellir is popular for its distinctive geology. This is the precise location where you can the actual tectonic plates of North America and Eurasia and also have been drifting apart.

The national park also has a visitor center, from where you can panoramically see the whole area in all of its majesty and glory.  It is from here the footpaths lead to the fissures between the continental plates. A souvenir shop, an interactive exhibition, and a small buffet are also available at the visitor center. We make our first stop in our tour in this place, so you can get a great introduction. Just like the route our tour goes parallel to the route.

It was declared as a National Park in 1930. Iceland passed a law that ensured the national park status. It stated that “a protected national shrine for all Icelanders, the perpetual property of the Icelandic nation under the preservation of parliament, never to be sold or mortgaged.” On July 2, 2004, is also nominated for UNESCO World Heritage site. They stated that it has a universal value so therefore should be preserved as a cultural site as well as a natural one.

Thingvellir by itself has a sub-attraction called Silfra Fissure: This distinctive place is relatively recent development created because of the newly opened continental rift between the continents. It appeared soon after the earthquake of 1789. The freshwater in this fissure is from Iceland’s second largest glacier. The water from this glacier takes around 100 years to get this fissure. The route is just 50 kilometers but still, it takes 100 years, which is incredible.  Therefore, the freshwater in this fissure is crystal clear till the depth of more than 100 meters, thus a perfect place for snorkeling. 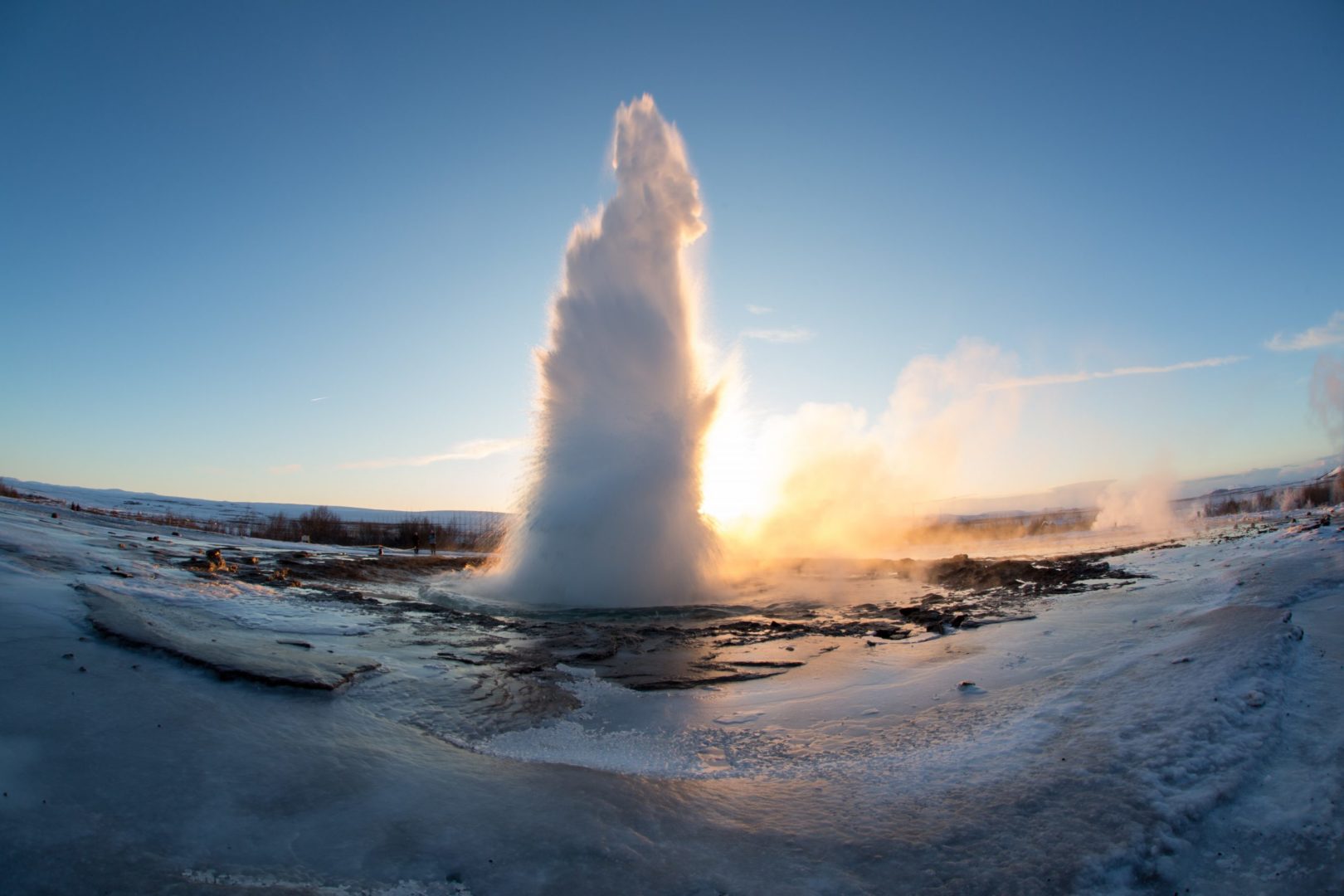 It is a world-renowned geothermal hot spring. The Great Geysir is what all of the other hot springs are named after and in many different languages. Most of the springs are aligned parallel to the land of 300-meter distance that is itself is parallel to tectonic plate lines, south to west. Steam rises from the ground and you can even smell the sulfur after it.

Here you can see the rare manifestations of underground volcanic activity. Your senses will be filled with awe and wonder once the Geysir does its thing. This location also has a visitor center. Angry fumaroles, boiling hot spring and cooling minerals are seen everywhere.

The English word geyser comes from the Icelandic verb “geysa” whose meaning is “gush”. This name was taken from the Great Geysir, which was formed in the 13th Century after the eruption of nearby Mount Hekla. In the 1900s, specifically in 1910, it was very active, boiling and gushing out every 30 minutes. Nowadays, it does not gushes that much but its neighbor called Strokkur sure does. 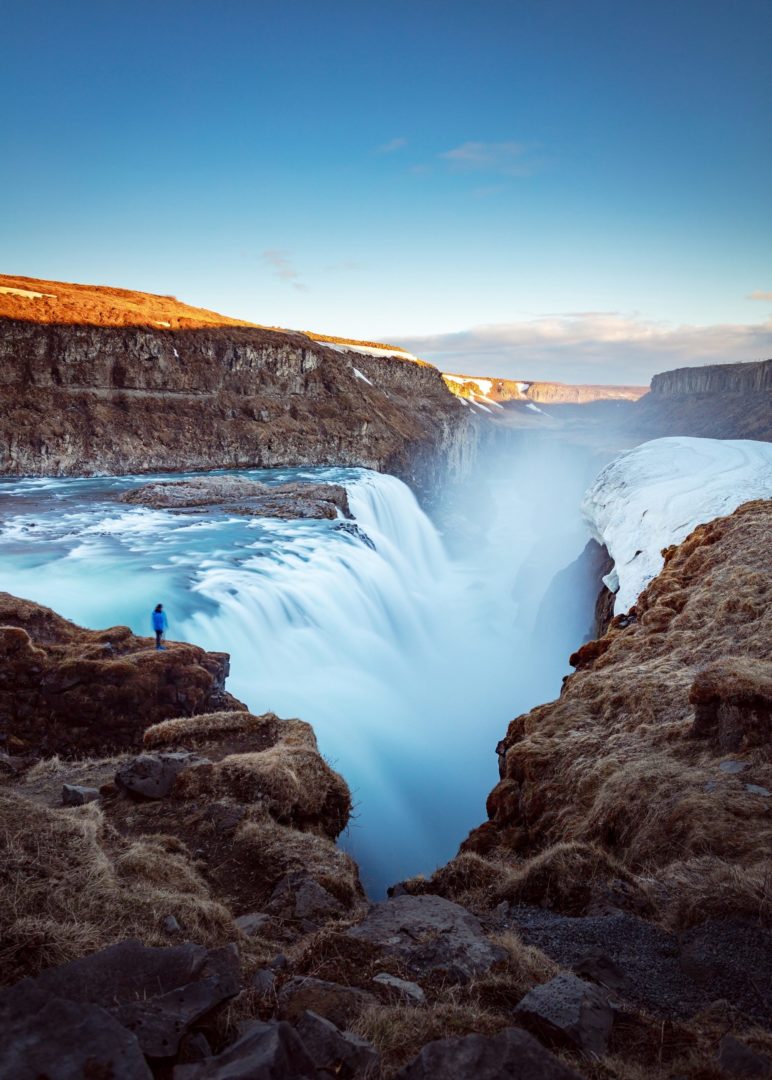 It is the last stop for the Golden Circle route, and its waterfall flows from Lake Hvitarvatn, which in turn gets its water from Langjokull Glacier. From there it rapidly flows southwards and finally reaches the waterfall and then finally disappears into a crevice. That crevice is 20 meters deep and you may think that the waterfall just disappears into thin air.

The word “Gullfoss” literally translates into “Golden Falls” or Waterfalls of the Gold. The waterfall has 2 step descent and cascades majestically through those two steps. They both measure 11 and 22 meters respectively. It has incredible power, and you will be able to feel on a sunny day. You will the cold glacial spray of water on your face when you are walking towards it. It is likely for a rainbow to appear on a nice and clear sunny day. You will feel fantastic when you will this piece of nature tumbling down in two steps with great fury into the deep while it drives along the meandering canyon. You will learn to appreciate the Icelandic nature and will, therefore, yearn for more. This is a glorious site that no visitor shall miss and it should be on the must-see list.