Meat in Icelandic Cuisine: 5 great types of meat to know about

Icelandic cuisine is mostly based on fish recipes but this does not mean that we do not have any meat recipe to offer. Recipes of meat in Iceland may be low in numbers but the ones that do exist can dazzle an eater with its taste and presentation. What people eat in Iceland though is becoming internationally famous now. Individuals looking forward to a visit of Iceland you should know some history about its culture and traditions. This means the prospective visitors should also know about the food traditions and how they came up to be. 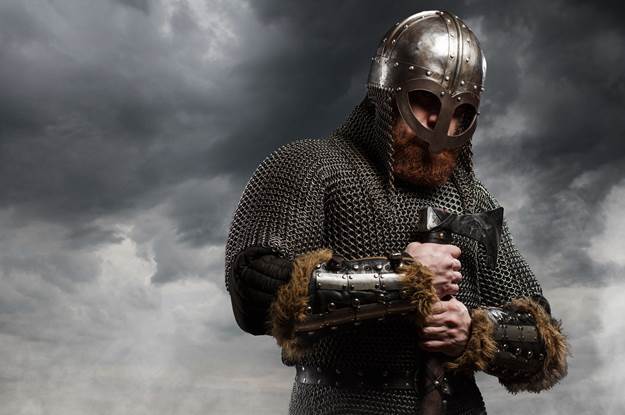 One of the earliest ancestors of Iceland were the ever famous Viking Warriors who came to and settled in early 9th century Iceland. Iceland, even at that time was surrounded by the freezing Atlantic Ocean and harsh winter weather. This meant there was going to be a shortage of food on the remote island itself. The new settlers started looking for food in the place where it could be in abundance. And this place was the Atlantic Ocean, which had its coastline at the Icelandic shores. 20% of the fish catch comes from the world’s second largest ocean which the Atlantic Ocean is. It also has considerable species of edible fish. This is what they used to eat in Iceland in the ancient times.

The History of Icelandic Food and Meat:

The ancestors of Iceland’s current residents probably found out that it would be much better if they find their food from the ocean at their doorstep. They also probably knew that the cold ocean may have better chances of having food than the freezing land itself. Till this day, this is the reason that much of the cuisine in Iceland is based on fish. Although now it is changing through the help of modern technologies and interconnection between countries. Now meat is readily is available through the supermarkets, meat shops and some animals that do roam the natural landscape of Iceland. 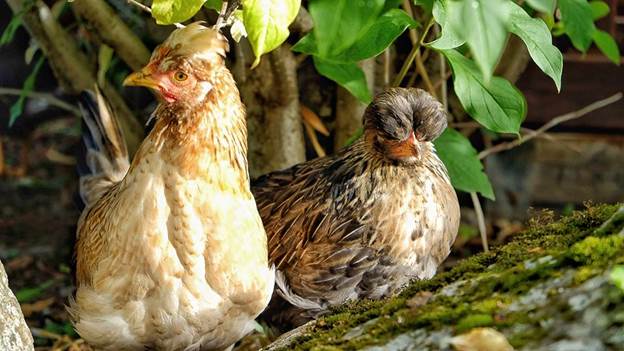 Tourist traffic has considerably risen since the 2008 financial crisis meltdown, which has led to the explosion of the popularity of Icelandic cuisine. Because of the meltdown, lots of individuals who loved to travel probably lost a lot of cash. It is probable that Iceland, which is naturally very beautiful, provided an alternative for the less cash-strapped individuals who love to travel. Since then the travel and food industry has been booming for Iceland.

Tourists visit Iceland and one of the first things the visitors do is that they try out the unusual cuisine of Iceland no matter what country they are from. Queues line up at the high-end restaurants not just for seafood but for the meat-based recipes that are exclusive to Iceland. There is a different range of meat recipes available that pertain to different kind of meats. The meats can range from sheep, lamb, pork, beef, and even a horse or a whale. While the fish is culturally significant for the local dwellers, the meat is also quickly becoming a good choice for locals and tourists alike. Both of these lean meats has become a staple of what do people eat in Iceland.

Why do the people of Iceland like their food:

First of all, almost everyone like the food of their home country and second the food here in Iceland is culturally significant for local dwellers. As mentioned before, due to the cold weather and harsh living conditions in the early times of Iceland, locals had to find their food in a place where scarcity was seen everywhere. The usual meat like chicken was not available. Vegetables were difficult to grow in the country due to freezing conditions. People sort refuge to the ocean for fish and the animals that they could see in their radius. These animals were very much likely horses or sheep. Sometimes the residents could also find Lamb. 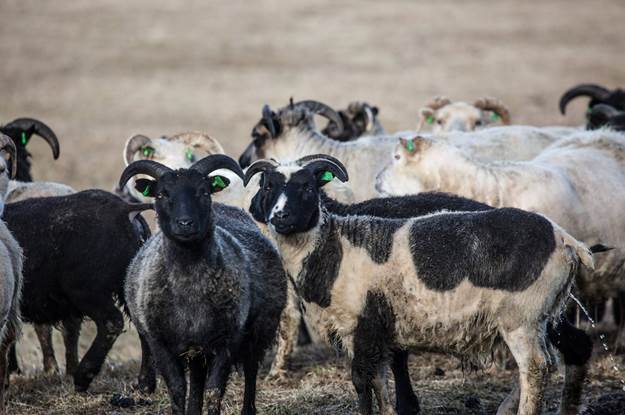 The meat mentioned above and the fish from the surrounding ocean became the food of choice for the survival of many of the Icelandic ancestors. The scarce meat and the fish became culturally and historically significant for the local dwellers as these led to their ancestor’s survival. This is not saying that Icelanders do not like their food but are bound to it for cultural and historical reasons. No, they actually love their food and find them luscious all the time.  At times a single recipe can have different versions pertaining to different households in Iceland. They love their food because they were born and bred on this very same food. The food of Iceland is a favorite to its locals so much that they enjoy and organize huge food festivals like the Porrablot Feast based on their food. Many of the things of what people eat in Iceland is found in the infamous feast.

The myth about Icelandic Food:

You may be asking this question because you may think that the food is rather disgusting here. It may be partly because of the few articles that you may have read online that paint them as discussing. Let us explain how the food of Iceland is essentially delicious and taste bud sweeteners.
Gone are the days when we use to eat the food just for survival. Not so long ago our country became a developed nation and the things we ate changed too. McDonaldization happened, which brought along western cuisine with it. Our fish became one of the best exports and one of the huge drivers of our country’s Gross Domestic Product. We also made and brought technological advancement to how we make the food from its raw form. People though still think that what people eat in Iceland is disgusting.

This is how our food has become tastier and more well cooked. While we do eat culturally significant food like the fermented shark (Hakarl) but we do so on some occasions like Porrablot Feast. Our food like Lamb soup is so tasty and delicious that you will end up wanting more. Our Skyr is one of the best protein source available in abundance here in Iceland. We also have our own take on a hot dog, which is very luscious and makes your tongue and teeth dance together. In the following paragraphs, you will see these foods and others like these in more detail and you will be making reasons to try out our cuisine in no time: 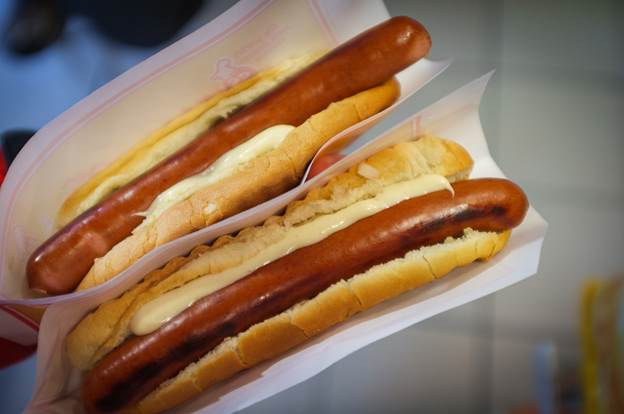 Reykjavik is the capital of the country if you did not know. It is known for many things and one of them is a hot dog from the world’s most famous hot dog stand. Ever since Bill Clinton paid a visit to Iceland’s Capital, he also visited Bæjarins Beztu Pylsur, which literally translates into to “the best hot dog in town” in English. Many hot dog stands offer this food item but this one in the capital shot to fame in 2004 after Mr. Clinton’s visit. It is usually made up of a mixture of lamb, beef and pork. Order it with eina með öllu, which literally means “everything” in English. This “everything” order includes raw onions, deep fried onions, remoulade, and brown mustard. We should also tell you that this popular stand always has long queues, especially at the pubbing hours. The locals are very much in love with it, so you will hear some suggestions about it from time to time.

Bæjarins Beztu Pylsur has been in business for over 60 years is still going well. While certain other stands and restaurants throughout Iceland offer hot dogs, this one should be tough to miss out on. It is because it has a certain taste to it with a touch of Icelandic flavor when compared to others. This recipe should be on your to-do list when you visit Iceland. The hot dog is one of the things of what people eat in Iceland. 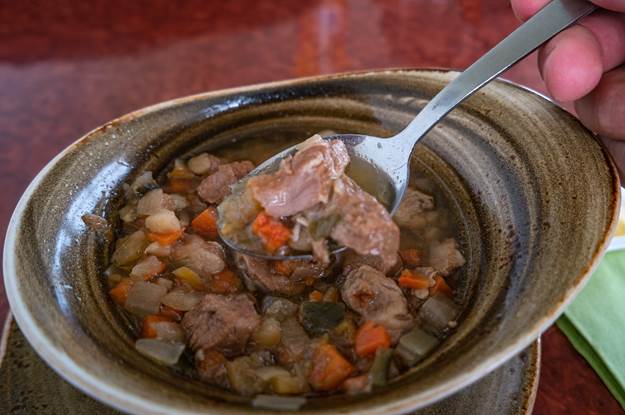 Lamb has been in Iceland’s blood since the early days. It has kept the early settlers warm for their bodies and full in their stomachs. Lamb is served in a different range of ways in Iceland whether its a restaurant or a household. Sometimes it is stewed with vegetable roots. Sometimes it is roasted and is served with spicy gravy.

It can also be turned into a smoked version of it. One of the traditional of smoking a lamb is Hangikjot, which translates into “Hanging meat” where the cooker hangs the lamb meat upside down on the fire rafters. This one of the meats of what people eat in Iceland 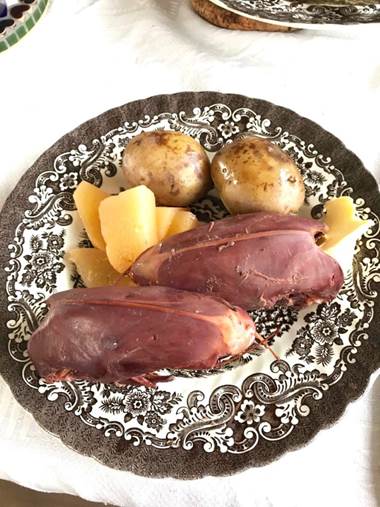 It is Iceland’s most iconic bird cooked to perfection, which tastes delicious too. While the hunting of Atlantic puffin is completely illegal, many parts of the country still allow it. This is why this bird is seen in a lot of menus of Iceland’s different restaurants. The meat of puffin is usually broiled or smoked. This is one of the meats of what people eat in Iceland. 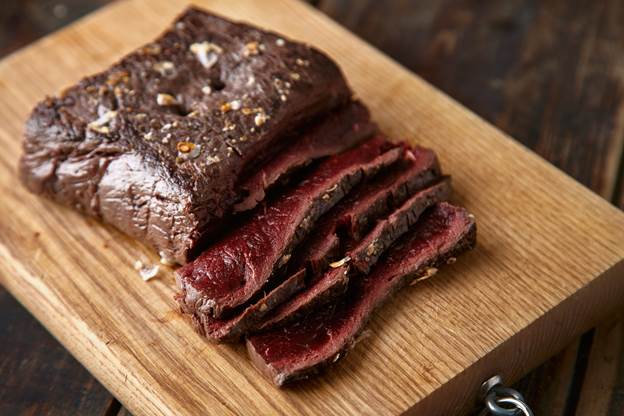 It may be controversial for some but before becoming an environmental activist with us, you should know Iceland is allowed a quota of 200 whales per year. From this quota, whales are served all over Iceland. It is very delicious, unlike sharks that are served in Iceland. It’s market is towards tourists as most locals do not eat it. This is not one of the meats of what people eat in Iceland but rather tourists do. 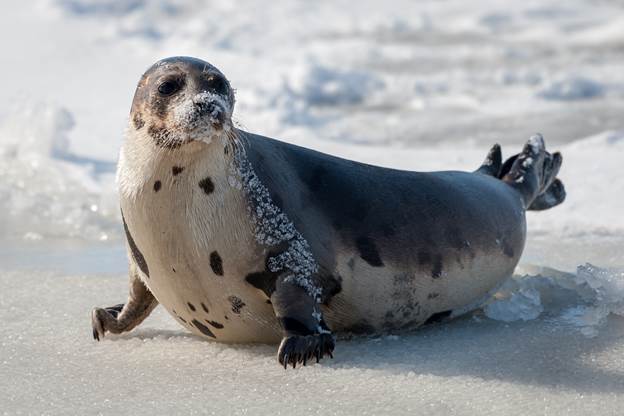 Iceland also serves up seal meat, which is usually dried through hanging before being cooked to perfection. Seal meat has incredible nutritional value, and it is being used for consumption for humans for a considerable time. It is a lean meat, only has 2 % Fat and has considerable long chains of Omega 3 Fatty acids that are good for health. This is the reason seal meat is used in Iceland’s different range of cuisine. This is one of the things of what do people eat in Iceland.