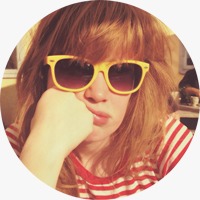 Since Iceland is surrounded by the sea it doesn’t come as a surprise that our cuisine is rich in fish and other seafood. In fact, we’re so passionate about our fish that we have actually gone to war with England over it – the Cod Wars of the 1970s! But traditional Icelandic food also has an abundance of meat, particularly lamb. Let’s take a look at some of the most traditional dishes and food items you can sample during your stay in Iceland. 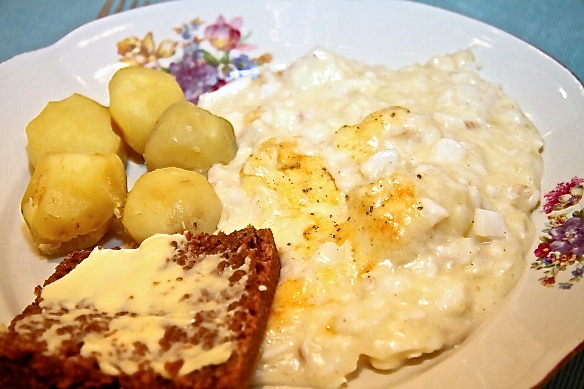 This fish dish is basically a stew consisting of boiled cod or haddock mashed in with potatoes. Back in the tougher times this used to be a way to preserve leftovers, but today it’s a popular dish loved by locals. 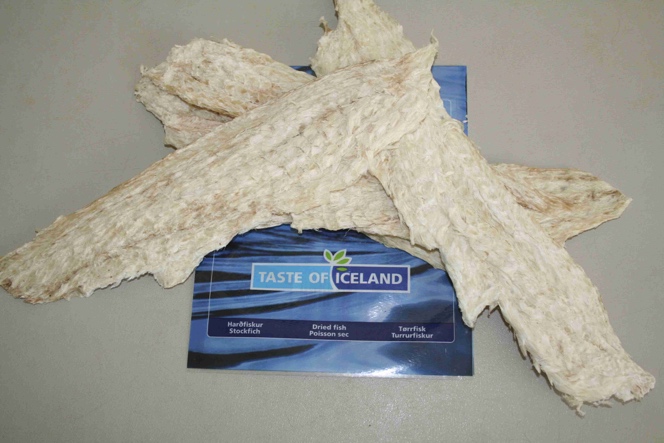 This dried fish jerky is a staple in Icelandic snacks! Extra good with butter on top – why eat potato chips when you can have dried fish! 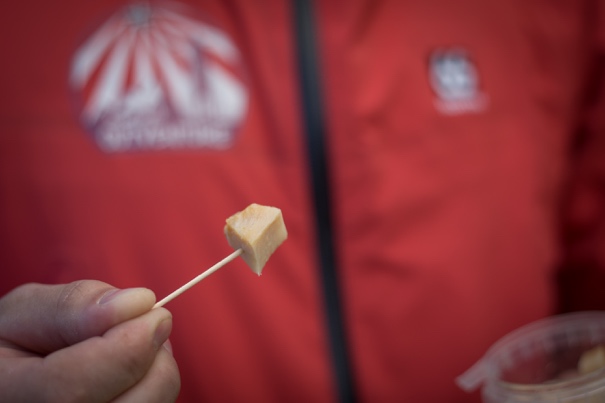 Eating a piece of fermented shark is a rite of passage for tourists visiting Iceland. I won’t lie to you, this ammonia-smelling “delicacy” is pretty disgusting (and I’m being generous here) but it makes for a great travel anecdote! And at least it’s not preserved with urine anymore! 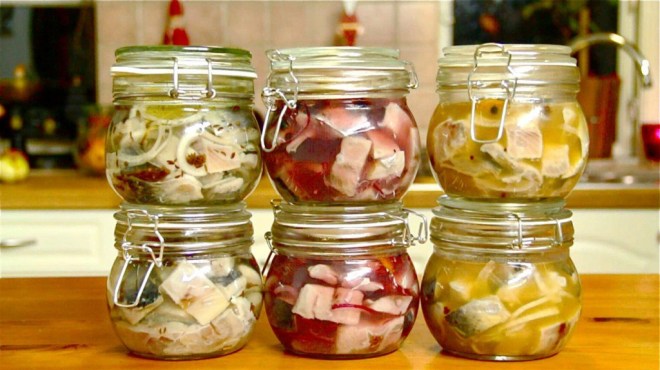 This is one of my favourites: pickled herring that‘s been cured and then marinated in brine with additional flavour-makers, such as peppercorns, bay leaves, onions and all kinds of good stuff. This is a traditional dish around Christmas but is available in the shops year round in all sorts of flavours. Great to eat on a piece of rye bread. 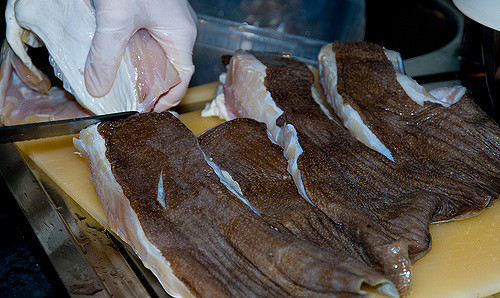 One of our weirder food traditions is eating this foul-smelling fish the day before Christmas so every home in Iceland smells of ammonia!Skata is buried and fermented skate, usually served with “hamsatólgur” or melted sheep suet. For those faintat heart who are offended by the smell, despair not as skatais usually served alongside Saltfiskur, or salted fish, which is a lot easier on the nose! 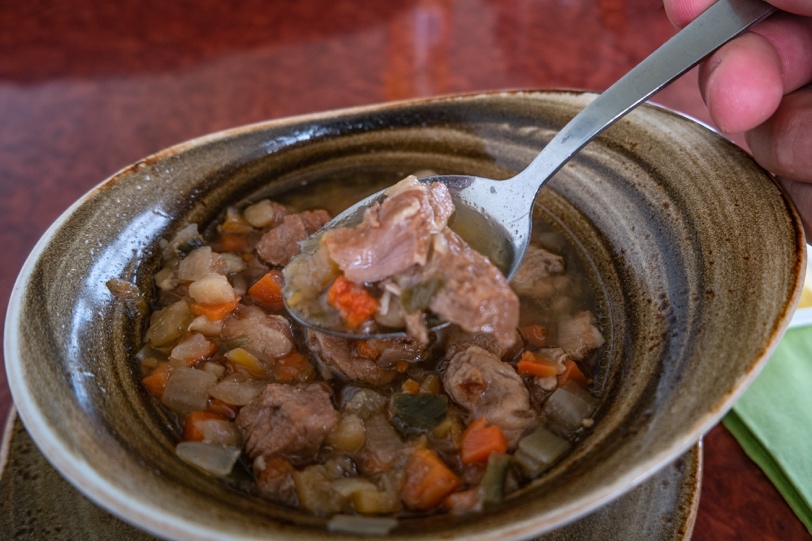 Literally: meat soup! This dish is warm, hearty, pure comfort – the kind of dish our grandmothers are great at cooking. Apart from the obvious main ingredient of lamb meat there’s a bunch of root veggies and herbs which makes it even more savoury and yummy. 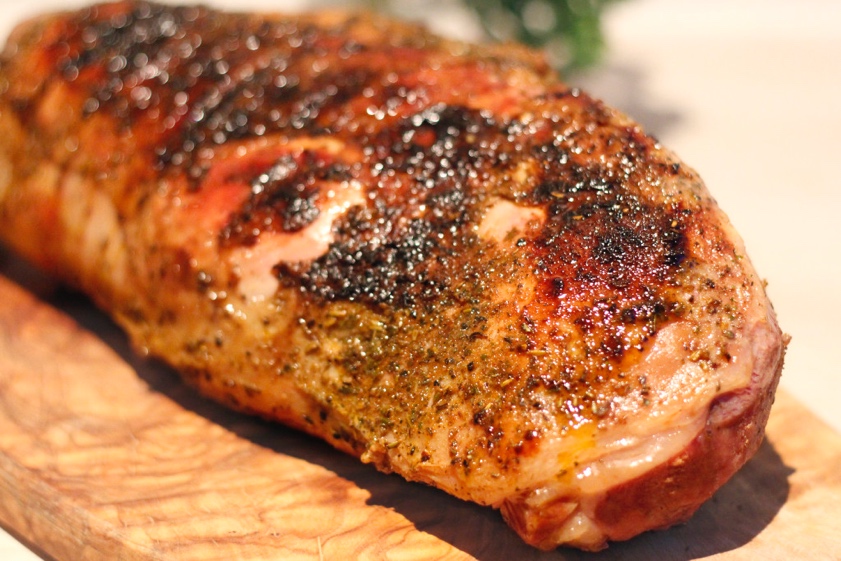 Come spring, there’s nothing better than a traditional leg of lamb as a Sunday roast. In Iceland, sheep are let out to roam in the summer and it’s very common to see a flock up on the mountains, munching on wild herbs and grass, which makes the meat so much more natural and delicious. A leg of lamb is usually roasted with a lot of garlic and herbs and served with fresh potatoes and gravy. Pure perfection. 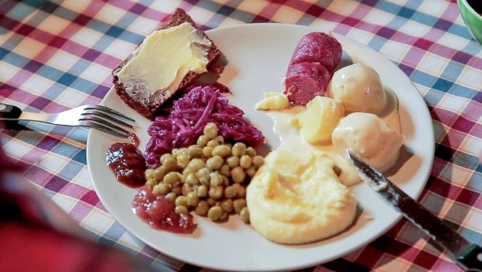 If you fancy a bit of horse meat, sample this rich dish! This smoked and salted sausage can be made either with lamb or horse and is served with potatoes, peas and a generous serving of sweetened bechamel sauce.
. 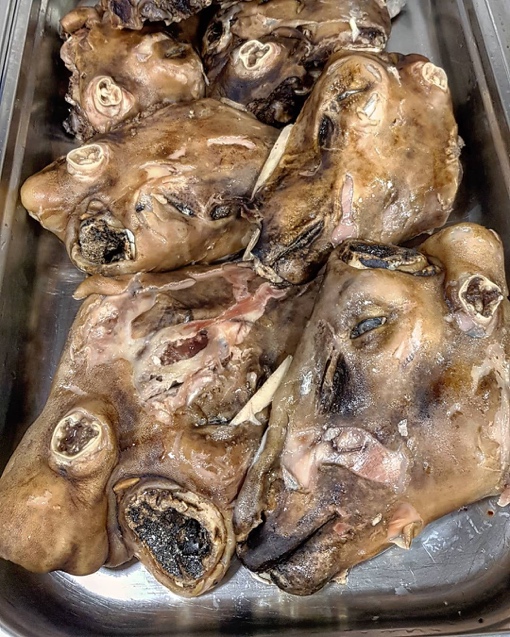 After hákarl, this is the second most important “extreme food” challenge! Ever fancied eating a boiled sheep’s head, eyes and all? Well, now is your chance! It’s classic to eat this at the cafeteria at the BSÍ bus station (where the Flybus stops) – something I do every time I visit Iceland. Served with mashed potatoes and mashed turnips, this dish is actually much tastier than it looks (tip: the tongue is the best part!) 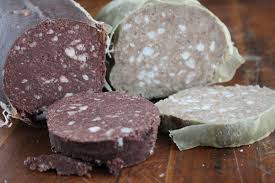 is made from sheep innards and comes in two types: blóðmör, which is similar to the English blood pudding, andlifrapylsa, which resembles the Scottish haggis. Pouches are made from the sheep’s stomach and a mixture of sheep’s blood, fat and minced liver then poured in and the whole thing sewn shut before it’s boiled. My grandmother, who lived on a farm, used to make slátur every fall and I remember the messy kitchen well. Slátur is a must when eating hrísgrjónagrautur (our very delicious rice pudding) and is also a great match with hafragrautur (oat meal). Some people like to eat it sprinkled with sugar on top… what can I say, Icelanders love their sugar in food! . 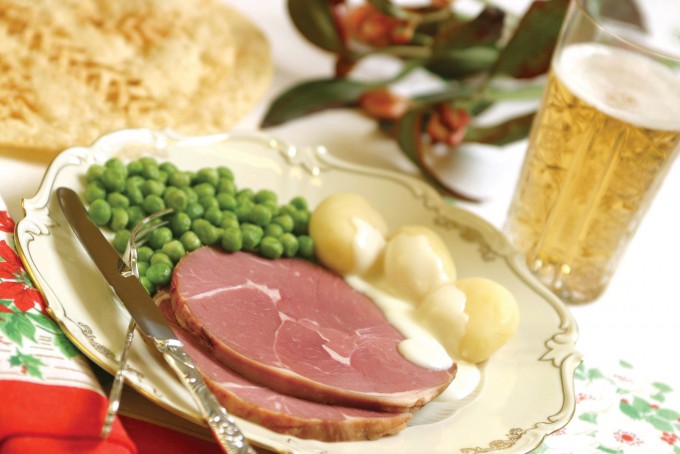 is mostly eaten around Christmas but you can buy packaged slices in the cold-cuts section as well. This smoked lamb is a beloved dish with us Icelander and is more or less served with the same sides as the above-mentioned “bjúgu”: potatoes, peas and sweetened bechamel sauce. A fun addition to the Christmas dish is “laufabrauð”, a wafer-thin deep-fried bread decorated with beautiful patterns. There is a wonderful Christmas tradition surrounding this bread where families get together to decorate the round cakes before they get fried. For this you use a special tool, a brass roller (or “laufabrauðsjárn”) which creates the small leaf-like patterns which you then have to fold over one by one. 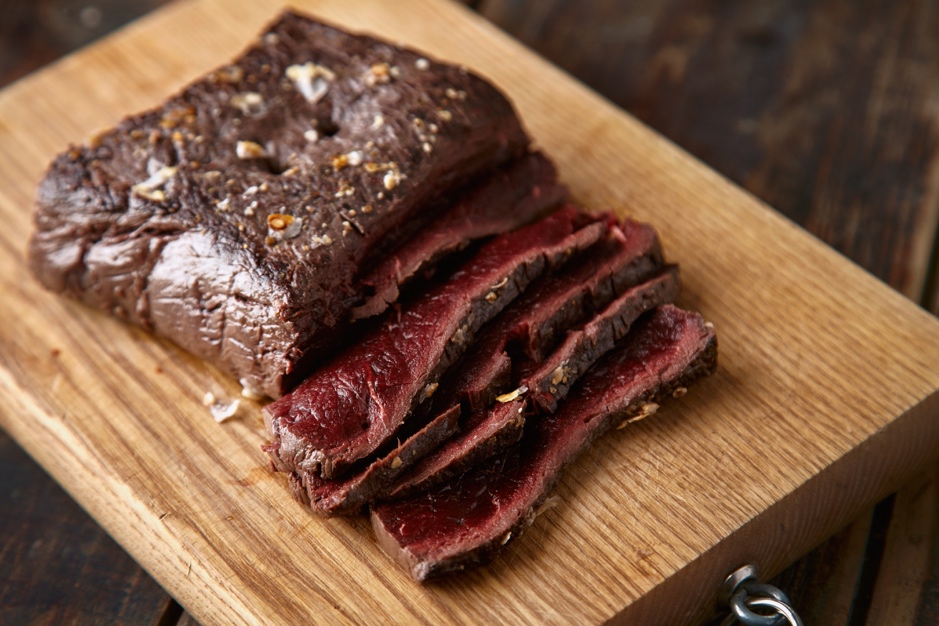 is actually not something you traditionally eat in Iceland anymore, but we have nonetheless made the delicious meat our trademark and a popular dish for tourists to sample. Several restaurants specialize in whale meat and you can also buy whale steaks in the food section of Kolaportið market as well as some grocery stores. 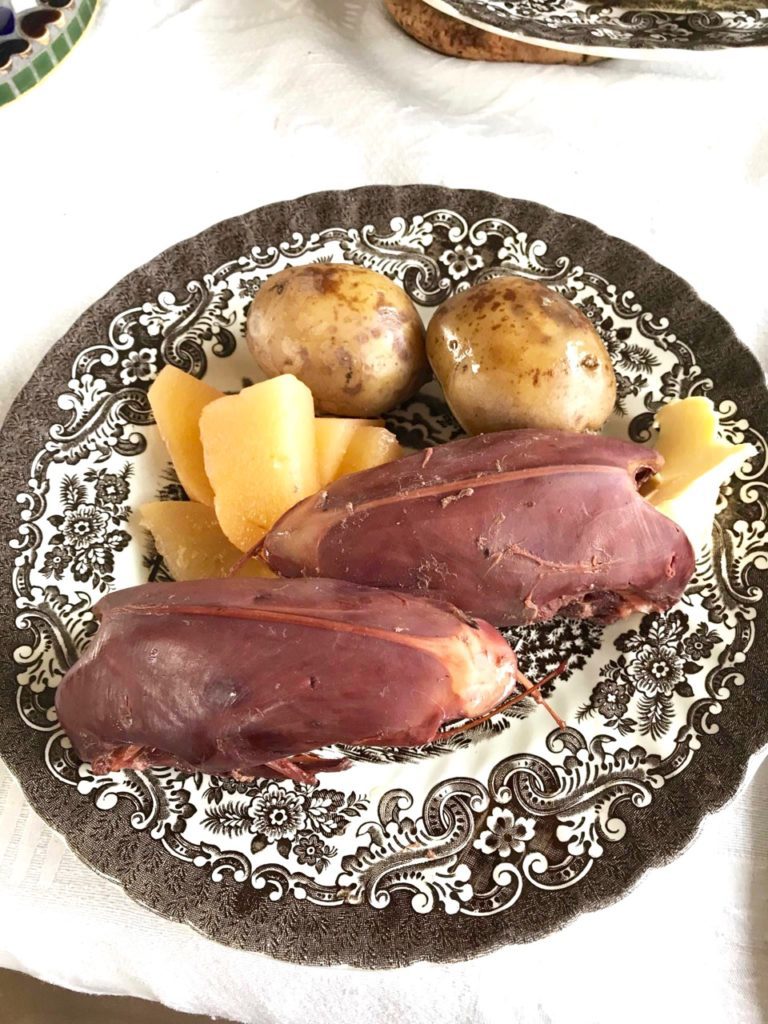 Puffin is another type of meat that is not that common in the Icelandic cuisine but has become a standard on the tourist menus. This cute bird, native to the Westman Islands, is usually served smoked and is a great delicacy. Recommend trying the puffin.

And then there’s the Þorrablót, a celebration of truly traditional Icelandic food held in January each year. This food feast represents the tough times Icelanders faced centuries ago, when resources were scarce due to the lack of sunlight and the country’s isolation. In those times, the diet reflected the harsh circumstances, hence all the weird food served at the Þorrablót. Þorri is the old name for the month of January, and this timewas chosen for the celebration as it was the month when days started getting longer again. At this point of the year, resources were stretched to their very limits and the struggle for survival was at its peak. During winter, everything was thrown in a barrel and preserved using a sour liquid called Mysa (more on that later). The food eaten during the Þorri was the least appetizing leftovers from the barrel – people were literally scraping the bottom of the barrel! A lot of the food we’ve already mentioned is featured in the Þorrablót, such as boiled sheep’s head, fermented shark, harðfiskur and slátur, but one dish we haven’t mentioned yet: sour ram testicles! Just when you thought Icelandic food couldn’t get any stranger… 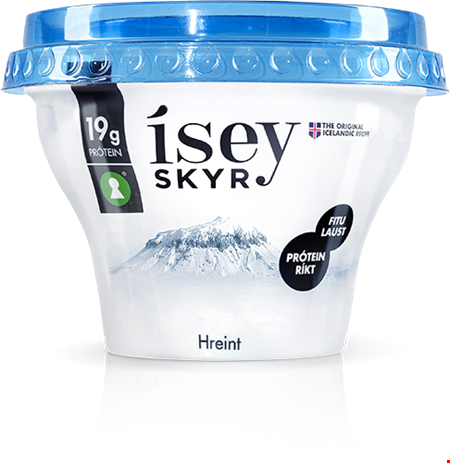 This healthy protein-rich low-fat type yogurt has been a staple in the Icelandic diet for centuries. It has the consistency of Greek yogurt but with a milder flavour. Skyr comes in a bunch of different flavours nowadays and is hard to beat for a healthy snack! 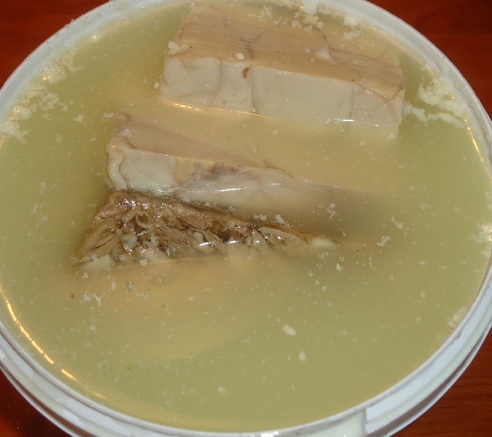 Along with Skyr, Mysa was another important staple in the diet of Icelanders in the olden days. Skyr and Mysa is what people survived on until salt was introduced in the diet and had it not been for this sour whey drink Icelanders wouldn’t have been able to survive the dark winters on this remote island. Mysa is the liquid that comes from producing Skyr and is what was used to preserve all the weird food people were forced to eat back in the day, the type of food we eat at the traditional Þorrablót mentioned above. This of course made the food very sour, but sour is better than not having food at all!

The first thing you need to know about this bread is that Icelanders can’t agree on what to call it! But whether you call it flatbrauð (flatbread) or flatkaka (flatcake) one thing’s for sure: you need to try some! The soft pan-fried rye bread (back in the day it used to baked on hot stones) is best eaten with a thick layer of butter and some slices of hangikjöt (that delicious smoked lamb mentioned above!) 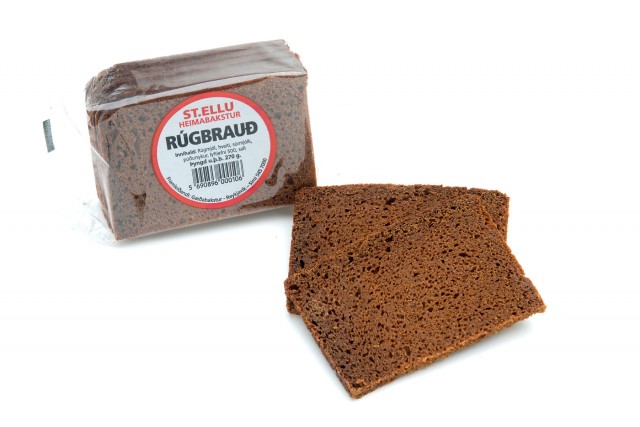 You can get really good rye bread in Iceland and it goes great with a lot of the traditional courses we have mentioned. The best is the one actually baked in hot springs! The pot containing thedough is buried by the hot spring and the geothermal heat then bakes the bread. We call this “hverabrauð” or hot spring bread.

Every Icelander will firmly claim that Icelandic sweets are the best in the world. We have this whole obsession with liquorice,which started already centuries ago when it was used as a sweetener before we had been introduced to sugar and honey, and a lot of our chocolate contains some of that delicious black stuff. I strongly recommend sampling some Icelandic sweets, such as Draumur, Þristur, Kúlu-Súkk, Hraun, Rís, Nóa Kropp, Bingókúlur, Lakkrísreimar… the list goes on!

We also have what we think are the best sodas in the world, namely Appelsín (an orange soda), Mix (a pineapple soda – which is quite unique I think!), and the pride of all Icelanders: Malt! This malty drink is held in high regards on our island and, along with Appelsín, is a must on the Christmas table where we mix the two to create the greatest drink of them all: bland (meaning mix)! 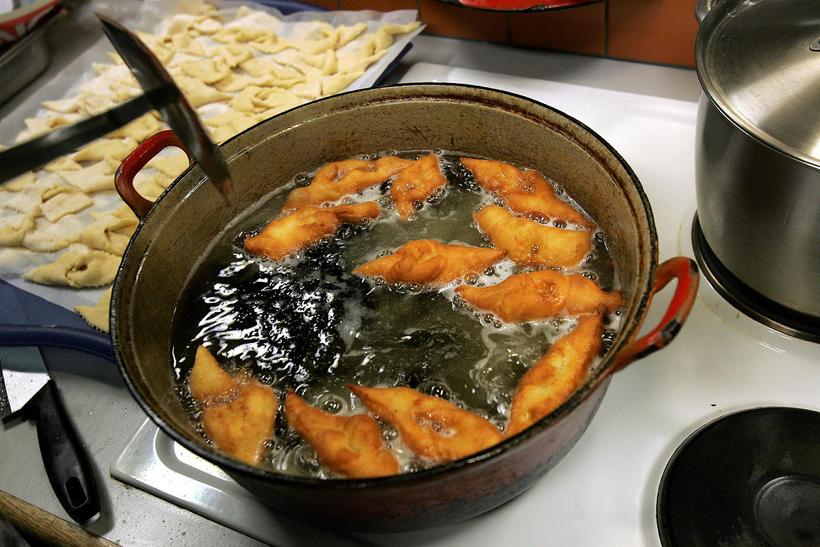 And then there’s thebaked-goods: kleina is a classic! This pastry is similar to a donut, with the addition of cardamom, and the twisted shape is iconic in Iceland. I still remember the kleina-smell that filled the kitchen at my grandparents’ farm as my grandmother often baked kleina and served them lukewarm to us kids with a glass of cold milk for dipping.And as with Laufabrauð, kleina also has a special tool called kleinujárn (or kleina-iron) you use to cut the shapes before you twist them.